Steve and I thoroughly enjoyed seeing The Stepmother by Githa Sowerby at the Orange Tree in March 2013. Having raved about the play and production, I expressed a desire that this piece would be revived more often; my wish has come true. The York Settlement Community Players (YSCP) are putting the play on in March, and although Steve and I won’t be able to make it up there for the run, I was delighted to receive an invitation from YSCP to support the production by publicising it in this blog, especially as it gave me a chance to interview some of the creative team via email (I’m a sucker for a peek behind the scenes). I sent in my questions, and the responses are below:

Githa Sowerby is a name that is rarely known, as the majority of her work still remains unpublished even today. Northern Broadside toured with Sowerby’s well-known play Rutherford & Son in 2013 to high acclaim, whilst The Orange Tree Theatre in Richmond revived The Stepmother and received a 4 star review from The Guardian’s Michael Billington. In addition, Writer and Actor Hannah Davis toured with her own production – GITHA, which tells the story of Githa Sowerby’s struggle to become a writer in a male-dominant industry.

Now in 2014, YSCP – a theatre company based in York, will present the Northern premiere production of Sowerby’s The Stepmother in the Studio at York Theatre Royal. 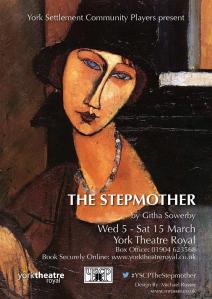 Poster for The Stepmother (YSCP)

These responses are from Director Maggie Smales, YSCP Secretary Beryl Nairn and Actor James Martin, who will be taking on the role of Eustace Gaydon.

How did you come to choose The Stepmother?

Beryl: YSCP always aims to seek out excellent, but lesser known plays; in particular, championing those by female authors. We’d fallen in love with playwright Githa Sowerby and wanted to stage Rutherford & Son. However when we applied for the rights our hopes were dashed, due to a planned professional tour of the play in 2013 by Northern Broadsides, directed by Sir Jonathan Miller. We were very disappointed at first, but quickly came to realise that Northern Broadsides’ brilliant production would bring Githa’s name to a much wider audience.

Suddenly, Githa Sowerby was well and truly on the theatrical radar. In March 2013 The Orange Tree Theatre in Richmond produced The Stepmother, which was Time Out Critics’ Choice and received a four star review from The Guardian’s Michael Billington. Obviously, YSCP wanted to build on this tide of energy. You can imagine what a huge sigh of relief we all breathed when we were told that the performance rights to The Stepmother were available. So it is that we are proud to bring Githa Sowerby’s The Stepmother to York and, of course, to the North of England for the very first time.

How long is your rehearsal process? And how much research into the period did you do (if any)?

Maggie: We have been rehearsing since the beginning of January so it is about a 9 week period. We meet 3 times a week. Research is essential to achieve an understanding of the social, cultural and political context. I began last summer well before rehearsals began but it is an on-going process that involves not just reading but going to places, seeing things, listening to music – anything that helps to achieve a sense of time, place and space.

Did you find it easy to relate to the characters and their situations?

Maggie: The strength of Githa’s writing was what attracted me to the piece. She makes the characters completely credible within the situations they are placed. Like in Ibsen’s plays we watch the characters working their way through circumstances and towards decisions that will change their lives.

How challenging is it to make Eustace’s character unsympathetic and unpleasant enough without going over the top? Are you prepared to have the audience hate you?

James: Despite the temptation to play Eustace as a villain, I am keen to avoid this. Eustace does not consciously seek to deceive and defraud people, and I believe he is a product of the environment he grew up in.

Being born a male into wealth and with the mantra of bettering his already enviable social status this would have nurtured a sense of entitlement whilst also suppressing the development of a sense of morality. He simply doesn’t know any better. Eustace truly believes his actions are justifiable and for the right reasons. With this in mind I suppose what I’m looking to achieve is to convey the human aspect of Eustace Gaydon whilst tempting the audience to jump out of their seats and punch me in the face.

How do you plan to do the scene changes? (if it’s not giving away too much)

Maggie: We hope the play will move with pace and momentum so changes will be integral to this intention whilst also suggesting the passage of time.

How does YSCP use these productions to develop your members’ acting and related skills?

Beryl: YSCP believes in working with actors at all stages of experience. Some have been ‘treading the boards’ for years, while others are newcomers. In the past, YSCP has run acting workshops and we are also delighted that a number of our current cast for The Stepmother have benefited from Michael Lambourne’s acting classes at York Theatre Royal. However, we’re firm believers that nothing is more effective for honing the skills of acting than actually taking part in a production. Our open policy of discussion, sharing, mutual support, respect and learning-by-observation during rehearsals, plus our desire to foster a ‘Company’, where directors, actors, creatives and crew all feel they are contributing to the integrity of a production, creates an authentic esprit de corps. Yes, we have lots of fun. Yes, we have tea and biscuits. At the same time, we are passionate about theatre and about the quality of every play we produce. Staging our productions at one of the many York Theatre venues (in the case of The Stepmother it’s The Studio, York Theatre Royal) gives the actors a fantastic opportunity to get under the skin of a professional working Theatre, with all the benefits this entails.

Many thanks to Maggie, Beryl and James for taking the time to respond to my questions. I was particularly interested in James’ answer – a good reminder that actors see their characters from a different perspective to the audience. I was also glad to hear that you YSCP folk have a lot of fun, and even tea and biscuits! What more could anyone want? Thanks again, and all best wishes for the run.

For anyone who’s interested in seeing the play, the performance details are below.

© 2014 Sheila Evans at ilovetheatre.me and YSCP

2 comments on “The Stepmother in York”

This site uses Akismet to reduce spam. Learn how your comment data is processed.

Welcome to my theatre blog.
I’ve been writing these notes on my theatre experiences since 2006. Feel free to comment, and I hope you find something to enjoy.

All text ©2006-19 Sheila Evans at ilovetheatre.me unless otherwise stated. For more information see About

Blogroll (and other links)